"US Solicitor Sides With Sandoz In Biosimilar Case" Law360 article

The U.S. Solicitor General recently recommended that the U.S. Supreme Court grant certiorari and review the questions presented in both the petition and conditional cross-petition in Sandoz v. Amgen, No. 15-1039, and Amgen v. Sandoz, 15-1195. Each petition concerns provisions of the biosimilar statute, the Biologics Price Competition and Innovation Act, set forth at 42 U.S.C. § 262(l). Representing the interests of the United States government as amicus curiae to the court, the solicitor urges review because proper interpretation of the BPCIA will have a “significant impact” on the operation of the patent dance and on the ability of biosimilar manufacturers to bring their biosimilar medications promptly “to the public.” Br. 13.

If certiorari is granted, it will be the first case that the Supreme Court takes up concerning the BPCIA. Notably, the Supreme Court typically follows the solicitor’s recommendation to grant or deny certiorari. See David C. Thompson and Melanie F. Wachtell, An Empirical Analysis of Supreme Court Certiorari Petition Procedures: The Call for Response and the Call for the Views of the Solicitor General, 16 Geo. Mason L. Rev. 237, 245 (2009).

Sandoz has asked the court whether notice of commercial marketing under Subsection (l)(8)(A) is legally effective if given prior to approval by the U.S. Food and Drug Administration. If not, Sandoz asks whether the notice requirement can be enforced by an injunction delaying market entry of the biosimilar by 180 days.

Amgen’s cross-petition separately asks whether the BPCIA’s disclosure requirement in Subsection (l)(2)(A) — that a biosimilar applicant must divulge its abbreviated biologics license application (aBLA) and related manufacturing information to the reference product sponsor to start the patent dance — creates a binding obligation enforceable by injunction.

Underpinning both petitions is the Federal Circuit’s interpretation of the BPCIA in Amgen v. Sandoz, 794 F.3d 1357 (Fed. Cir. 2015). The case centers around Sandoz’s FDA-approved biosimilar Zarxio, which is intended to compete with Amgen’s Neupogen in the treatment of neutropenia, a deficit in circulating white blood cells. Sandoz launched Zarxio in September 2015 at reduced costs and only after a 180-day waiting period effected by the Federal Circuit’s holding.

The solicitor’s brief recommends that the Supreme Court find the Federal Circuit’s holding incorrect with respect to the timing of the 180-day notice required by Subsection (l)(8)(A), urging that the marketing notice can be given after aBLA submission and before the FDA licenses the biosimilar. With respect to the disclosure requirement in Subsection (l)(2)(A), the solicitor recommends that the court adopt the Federal Circuit’s holding that a biosimilar manufacturer is not required to disclose the aBLA application and manufacturing process information and start the patent dance. In short, the solicitor’s recommendations align with Sandoz’s positions concerning both petitions.

Subsection (l)(8)(A) provides that a biosimilar applicant shall provide notice to the reference product sponsor “not later than 180 days before the date of the first commercial marketing of the biological product licensed under” the abbreviated pathway. The solicitor rejects the Federal Circuit’s holding that the required notice of commercial marketing can only be made after the FDA licenses the biosimilar. The Federal Circuit had reasoned that an additional 180-day delay would give the reference product sponsor “a period of time to assess and act upon its rights,” 794 F.3d at 1360. The solicitor argues that no such temporal restriction is dictated by the statute. A biosimilar applicant can give notice at a time when the product is not yet licensed, so long as it is given not later than 180 days before the first date of commercial marketing. Br. 18.

Addressing the statute’s use of the word “licensed” in the past tense, which the Federal Circuit primarily relied on to reach its holding, the solicitor contends that this is most naturally read as describing the biosimilar product at the date of its first commercial marketing, and in no way implies that the biosimilar product must already be “licensed” as of the notice date. To find otherwise would result in the odd situation wherein a biosimilar manufacturer with a valid FDA license could be forced to wait 180 days after the FDA has authorized it to commence marketing, “even if the sponsor had no arguably valid infringement claim to warrant such delay.” Br. 14. The solicitor further insists that given the BPCIA’s expressly calibrated exchange periods and precise 12-year exclusivity grant, it is “particularly unlikely that Congress would have further delayed biosimilars’ marketing in such an indirect manner.” Br. 15.

Addressing the Federal Circuit’s logic that 180 days would allow time for development of a “fully crystallized controversy,” 794 F.3d at 1358, the solicitor contends that that interpretation runs counter to Congress’s policy judgments in the BPCIA. According to the solicitor, Congress specifically made an applicant’s submission of an aBLA an artificial “act of infringement” to facilitate early resolution of patent disputes soon after submission, which necessarily occurs before the FDA can grant a license.

The solicitor further asserts that Subsection (l)(8)(A) is much less about giving the sponsor time to “assess and act upon its patent rights” than it is about affording the applicant significant “control” over the pace and scope of litigation by allowing it to restrict litigation to just one patent or, conversely, to expand it to include all relevant patents. Br. 18. Thus, the government finds that the Federal Circuit was “incorrect” when it imposed an injunction on Sandoz to enforce its reading of Subsection (l)(8)(A). Moreover, Congress did not intend to authorize injunctive relief to enforce Subsection (l)(8)(A), the solicitor explains. A sponsor’s sole and proper remedy is an immediate patent-infringement action. Br. 20.

The government’s brief offers an interesting additional interpretation of Subsection (l)(8)(A)’s notice requirement. Rather than acting as a “stand-alone” notice provision in service of broadly allowing the sponsor to review and act on its rights, the solicitor argues that the notice is narrowly focused on triggering a statutory period. Specifically, it marks the beginning of Round 2 litigation (shown below as “Phase (4)” in Table 1), such that only after this date can the sponsor seek a preliminary injunction. This statutory period ends on the date of first commercial marketing. Prior to the applicant giving notice, the sponsor could not seek to enjoin the applicant from engaging in the commercial manufacture (or sale) of its biosimilar with respect to any Round 2 patents. Notice “lifts the BPCIA’s general postponement of litigation of Round 2 patents,” thus allowing for their resolution. Br. 17-18 (emphasis added).

Subsection (l)(2)(A) provides that the applicant “shall provide” to the sponsor, within 20 days of the FDA’s acceptance of its aBLA, a copy of the aBLA and manufacturing-process information. This disclosure is what starts the patent dance. As shown in Table 1, the solicitor breaks the patent dance down into four phases, each invoking a different subsection of the BPCIA. 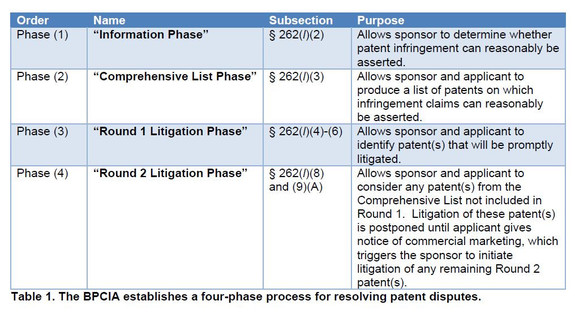 The government describes Subsection (l)(2)(A) as properly understood as imposing a mandatory disclosure condition for invoking the patent dispute-framework. But if an applicant fails to provide this disclosure, the BPCIA is set up to deprive the applicant of its control over the pace of litigation because the sponsor can immediately bring a declaratory judgment patent infringement suit under 262(l)(9)(C), thereby accelerating the procedural pace. Br. 21.

The solicitor stresses that the statute calibrates litigation by providing consequences for failing to take the recommended steps outlined in Table 1. For example, if the sponsor fails to provide a complete list of patents under Subsection (l)(3)(A), it will forfeit its right to assert any claim of infringement based on missing patents against the applicant’s biosimilar. Similarly, according to the solicitor, once the sponsor has identified a complete list of patents under (l)(3)(A), if the applicant fails to take further actions in response, as specified by the patent dance, the BPCIA is designed to deprive the applicant of its control at this juncture. Namely, noncompliance authorizes the sponsor to bring suit immediately on all of its patents, thereby hastening the pace and volume of litigation.

Why Resolve These Questions Now?

The solicitor relies on policy and explains that “[b]iologic medicines are among the most important pharmaceuticals available today” and “are also among the most expensive, with costs often exceeding tens of thousands of dollars per year” in arguing that review is warranted now. Br. 22. The same issues are now recurring in other actions pending in district courts nationwide (see, e.g., Immunex Corp. v. Sandoz Inc., No. 2:16-cv-1118 (D.N.J.) (filed Feb. 26, 2016)). And because the petitioner is a “repeat player in the biosimilar market” and the “respondents are industry leaders” in developing and manufacturing biosimilars, the solicitor finds this case to be an appropriate vehicle for review. Br. 23.

These points are certainly all valid for the market players and their counsel, who are just beginning to navigate the BPCIA in court and generate various behind-the-scenes strategies. Whether the Supreme Court agrees remains to be seen. And if it does, the statutory language driving these disputes is sure to be thoroughly parsed again.

Gina Nellesen is a former fellowship attorney in the Silicon Valley office of Fish & Richardson PC.

Elizabeth M. Flanagan is a principal in the firm’s Wilmington, Delaware, office.