Challenging design patents at the Patent Trial and Appeal Board is difficult — nearly two-thirds of petitions directed to design patents have been denied institution. While design patents are subject to the same statutory framework of novelty and obviousness as utility patents, the nature of design patents results in a unique analysis that often plays out differently.

Statistical review of all design patent challenges from 2013 through April 15 of this year highlights that comparison of the design as a whole to the prior art as part of Sections 102 and 103 analyses, scrutiny of potential Section 112 issues and careful attention to framing the scope of the design in claim construction, are critical to success at the PTAB for petitioners and patent owners alike. 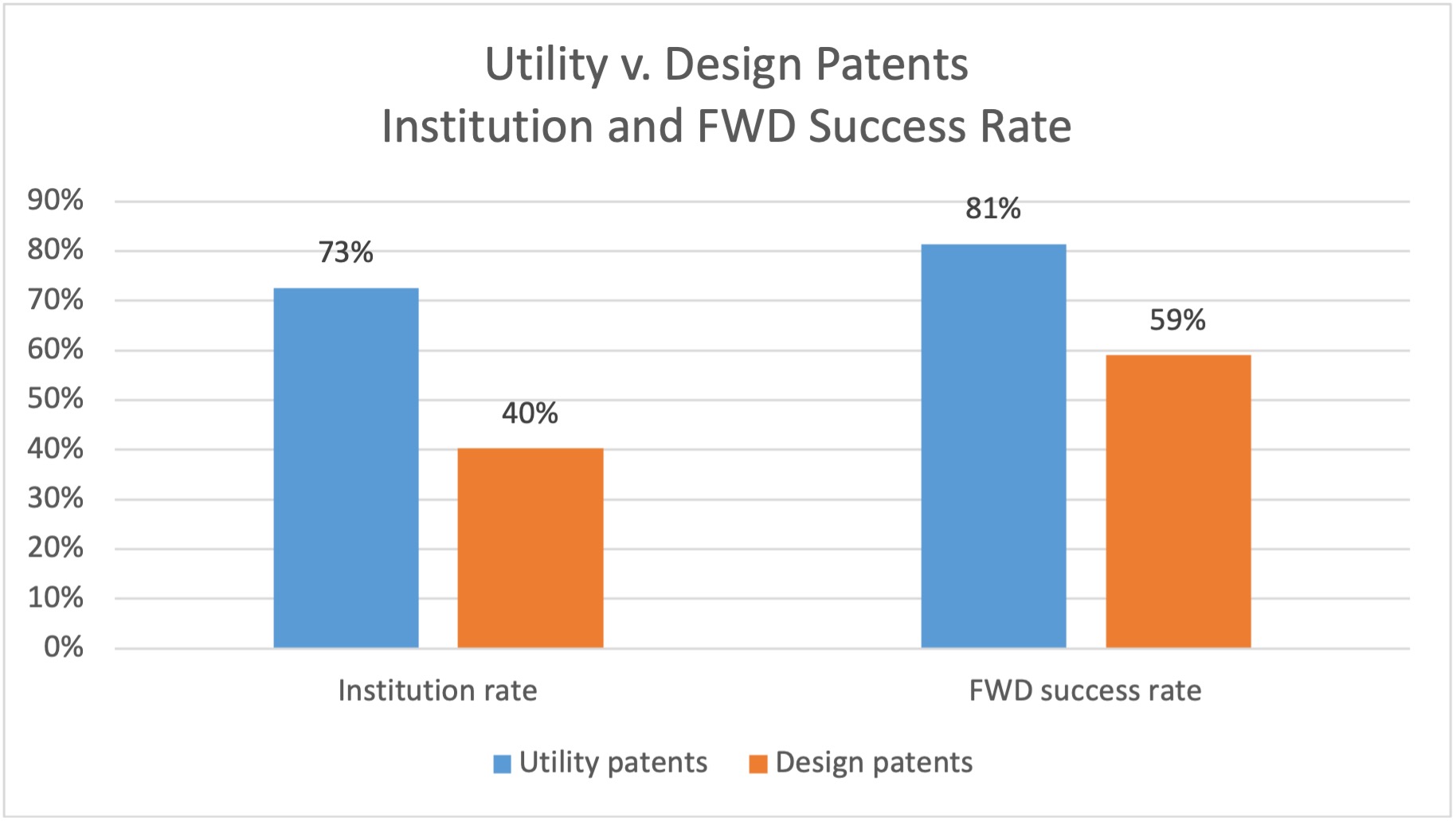 Why are design patents upheld at a significantly higher rate than utility patents? The numbers can partly be explained by the nature of design patents. Design patents protect ornamental appearance as shown in the drawings, and design patents thus tend to be relatively narrow in scope. Narrow patents are less likely to be found unpatentable.

Compared to utility challenges, which are primarily advanced as inter partes review design challenges, are more evenly split between IPRs and post-grant review, or PGR, in recent years, from 2013 to 2021.[3] 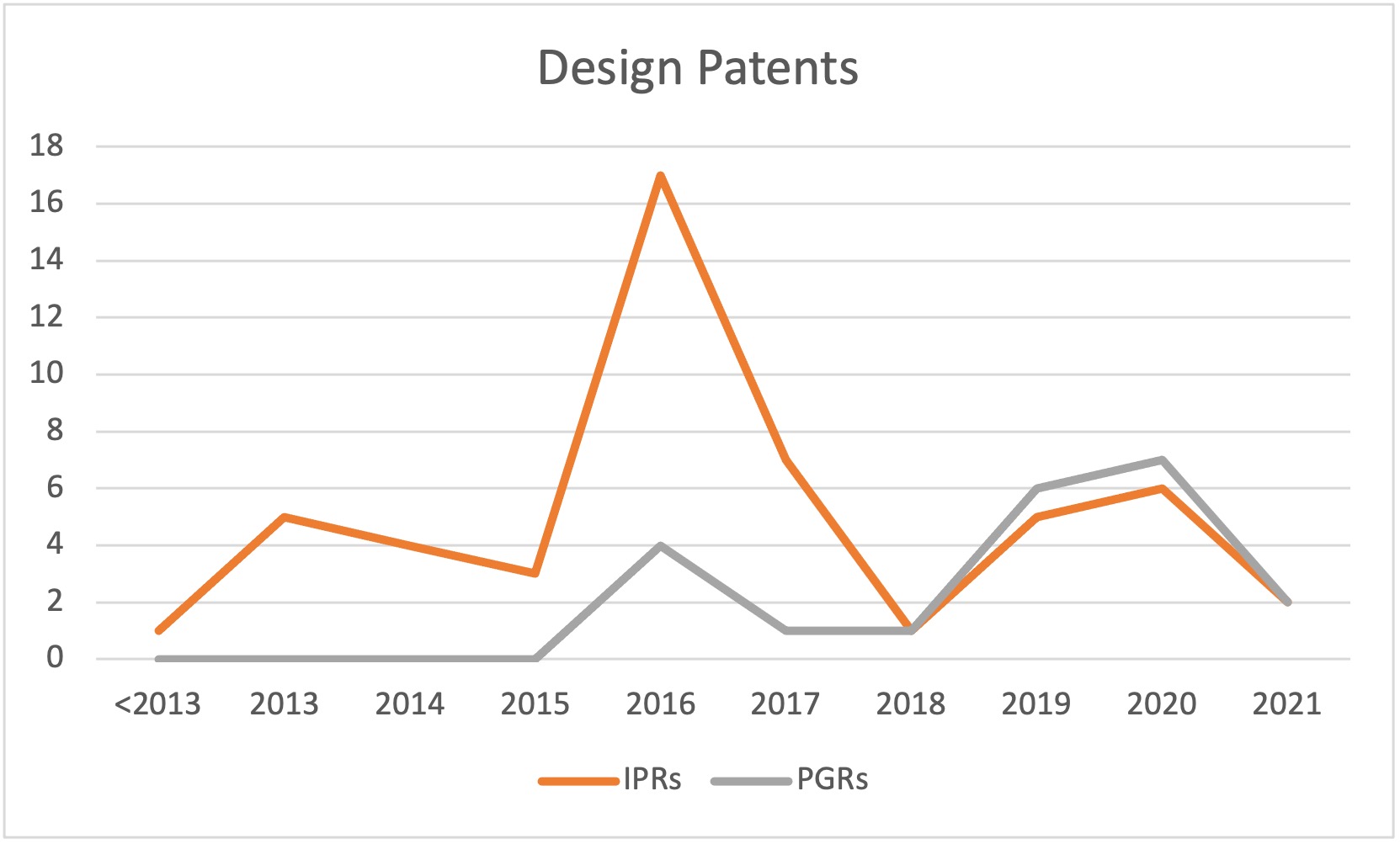 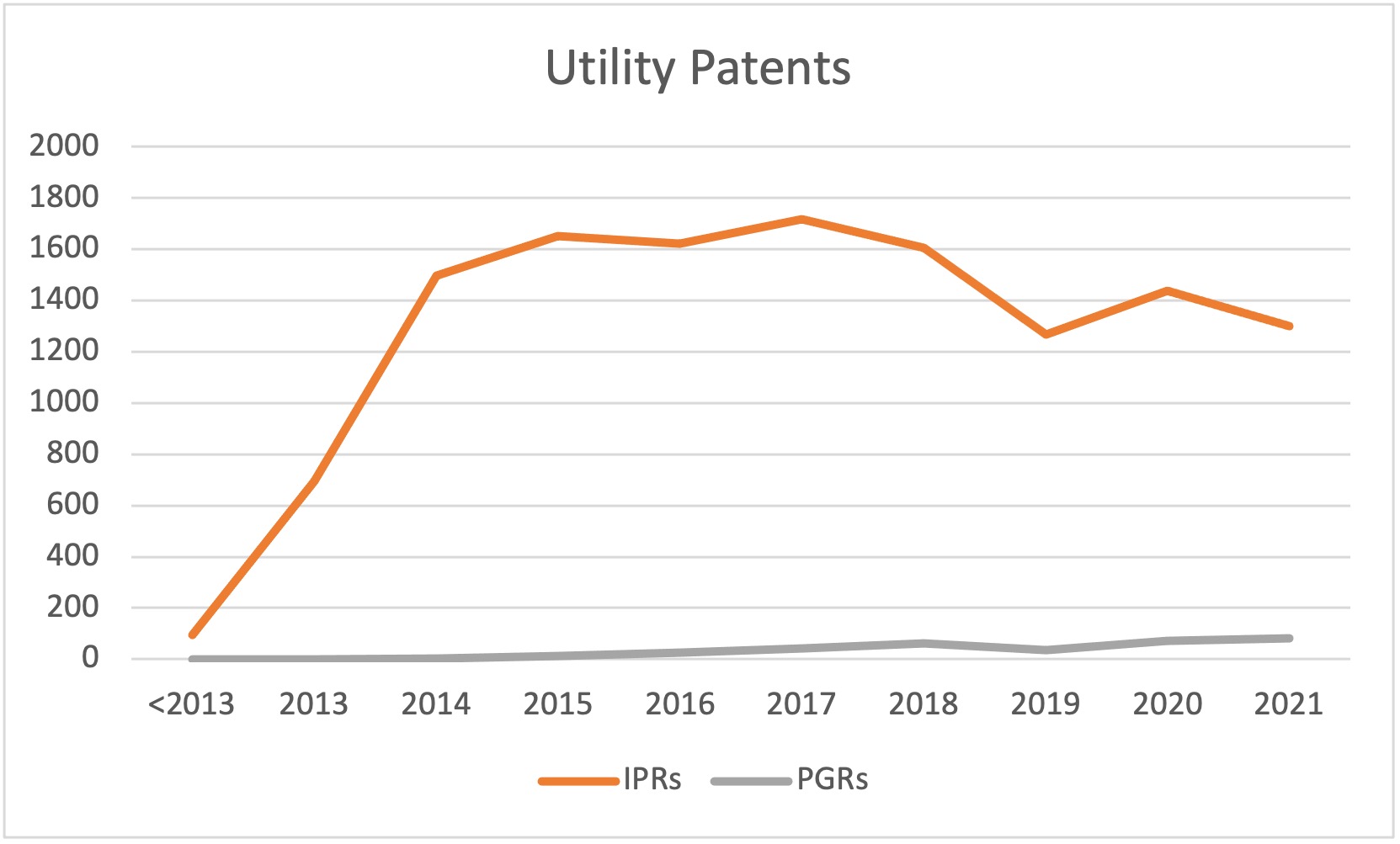 The relative prevalence of PGRs is informative. As PGR is available within the first nine months after a patent’s issuance, the relative rate of PGRs signifies that more design challenges are initiated early in the life of the design patent.

Design patents are often narrowly tailored to protect the look of a commercial product, and often issue close in time with commercial availability of a covered product. Notably, PGRs allow for a larger scope of available prior art — product prior art in addition to printed publications — as well as Section 112 grounds.

While the scope of a design patent is dictated primarily by the overall appearance of the design as illustrated in the figures, the U.S. Court of Appeals for the Federal Circuit has provided guidance on the importance of a verbal description:

The trial court must first translate [the design patent’s] visual descriptions into words, so that the parties and appellate courts can discern the internal reasoning employed by the trial court to reach its decision as to whether or not a prior art design is basically the same as the claimed design.[4]

Claim construction in design cases should be approached with a particularly strategic mindset because many design patents include little or no written description of the claimed design beyond the title and some minimal identification of features. Claim construction in design patent cases presents a particularly meaningful opportunity to set the stage for the anticipation, obviousness and written description analyses that follow.

[I]f, in the eye of an ordinary observer, giving such attention as a purchaser usually gives, two designs are substantially the same, if the resemblance is such as to deceive such an observer, inducing him to purchase one supposing it to be the other, the first one patented is infringed by the other.[5]

The anticipation analysis is conducted from the perspective of the hypothetical ordinary observer, which provides an early opportunity for petitioners and patent owners to set the stage by correctly identifying the ordinary observer. Is it a retail consumer or professional buyer?[6] Is it a buyer of an end product or a component for assembly into a system?

Identification of the ordinary observer could, in certain cases, affect the attention given to details of the design and influence the analysis of the overall appearance of the design. Relatedly, the ordinary observer is considered to be familiar with prior art designs, likewise affecting the impact of particular design aspects on the overall appearance of a design.[7] 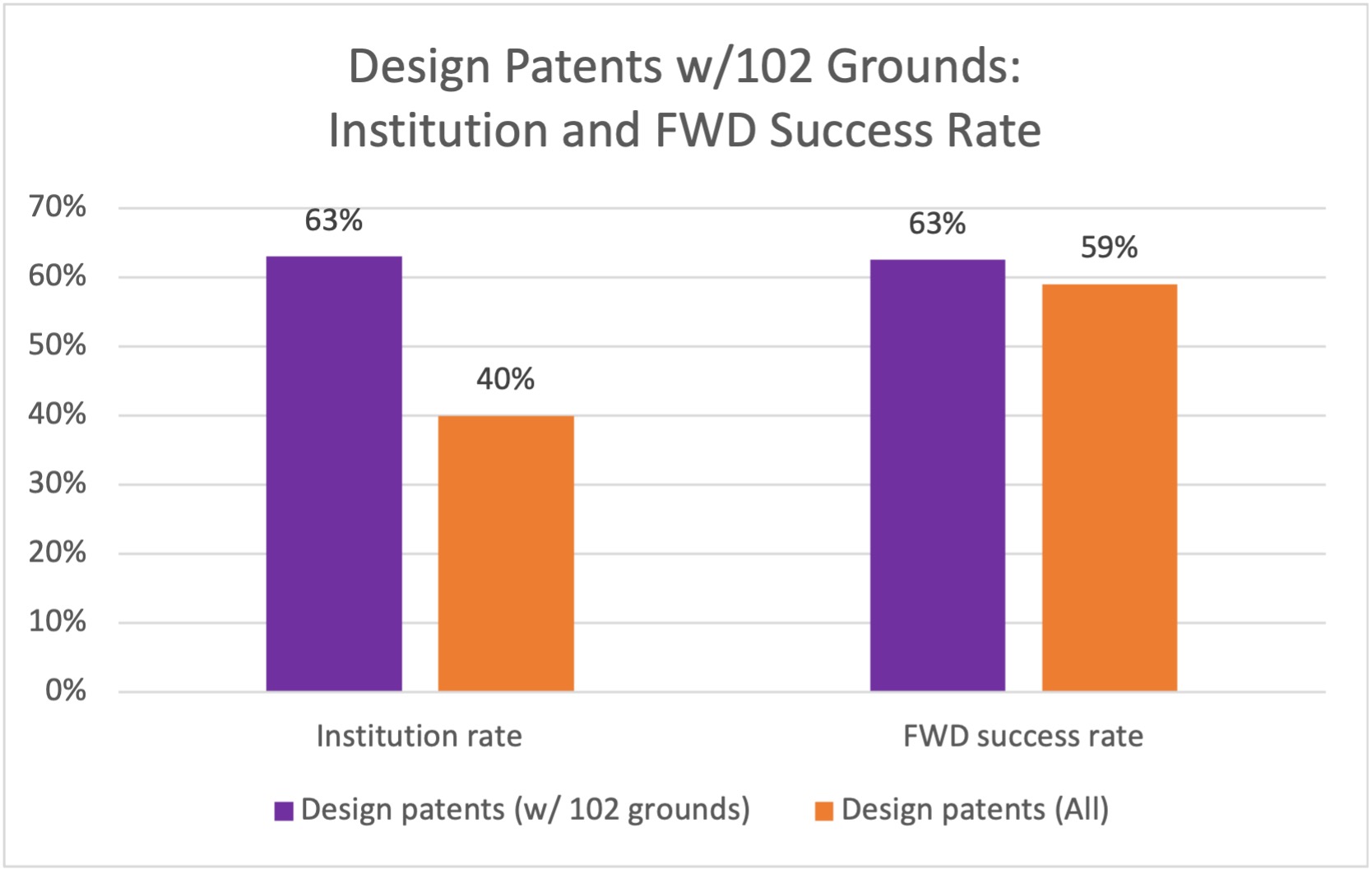 Perhaps not surprisingly, of the relatively few successful petitions found to demonstrate unpatentability, several included Section 102 grounds that relied on the patent owner’s prior art directed to the same or a similar product.[8] Prior art that provides a very similar overall appearance to the claimed design is imperative to a successful design challenge.

Like anticipation, the standard for obviousness of design patents differs from that of utility patents. For utility patents, an invention is considered obvious if the differences between the claimed invention and the prior art are such that the claimed invention would have been obvious to a person of ordinary skill in the art, or POSITA, at the time the patent application was filed. Rather than considering the perspective of a POSITA generally as in the utility patent context or of the ordinary observer in the anticipation analysis of design patents, the obviousness inquiry for design patents involves a designer of ordinary skill, or DOSA, and asks whether the claimed design would have been obvious to a DOSA who designs articles of the type involved.

This inquiry involves two steps. The first step asks whether there is a Rosen reference, or, “something in existence, the design characteristics of which are basically the same as the claimed design in order to support a holding of obviousness.”[9] This analysis involves determining the “visual impression created by the patented design as a whole” and asks “whether there is a single reference that creates basically the same visual impression.”

Historically, obviousness challenges before the PTAB have favored patent owners. In particular, petitioners have struggled to convince panels that prior art references qualify as Rosen references, reflecting a high bar in analyzing the first step of obviousness.[12] In these cases, because the petitioner could not establish a proper Rosen reference, the PTAB’s analysis did not move to the second obviousness inquiry.

Where the PTAB’s analysis reached the second step, petitioners have still faced uphill battles. In Premier Gem Corp. v. Wing Yee Gems & Jewellery Limited in 2016, the PTAB criticized the petitioner’s “improper[] foucs[] on design concepts rather than overall visual appearance,” noting that the petitioner analyzed “general design concept[s] ... at too high a level of abstraction to be useful in this obviousness analysis.”[13]

The PTAB also cautioned against the use of hindsight, suggesting that petitioner should have addressed its selective use of design characteristics of the prior art as well as changes to the combined design that would have been necessitated by the combination.

Moreover, arguments regarding secondary considerations such as commercial success, can be persuasive to the PTAB in findings of nonobviousness. Even in the recent Campbell Soup Co. v. Gamon Plus Inc. ruling where, on appeal, the Federal Circuit invalidated the challenged design patents, the PTAB had twice upheld the patentability of the soup can dispenser designs in view of evidence of commercial success.[14]

The breakdown of Sections 102 and 103 design patent challenges at the PTAB, and the relative success of each, likewise highlights ways in which design challenges present unique difficulties in the obviousness context. Not surprisingly, nearly all design patent petitions included at least one Section 103 ground.

Thirty-nine petitions, however, did not include a Section 102 ground. Of these petitions, the rate of success was lower than the overall rate for design challenges — only about 21% of petitions were instituted. 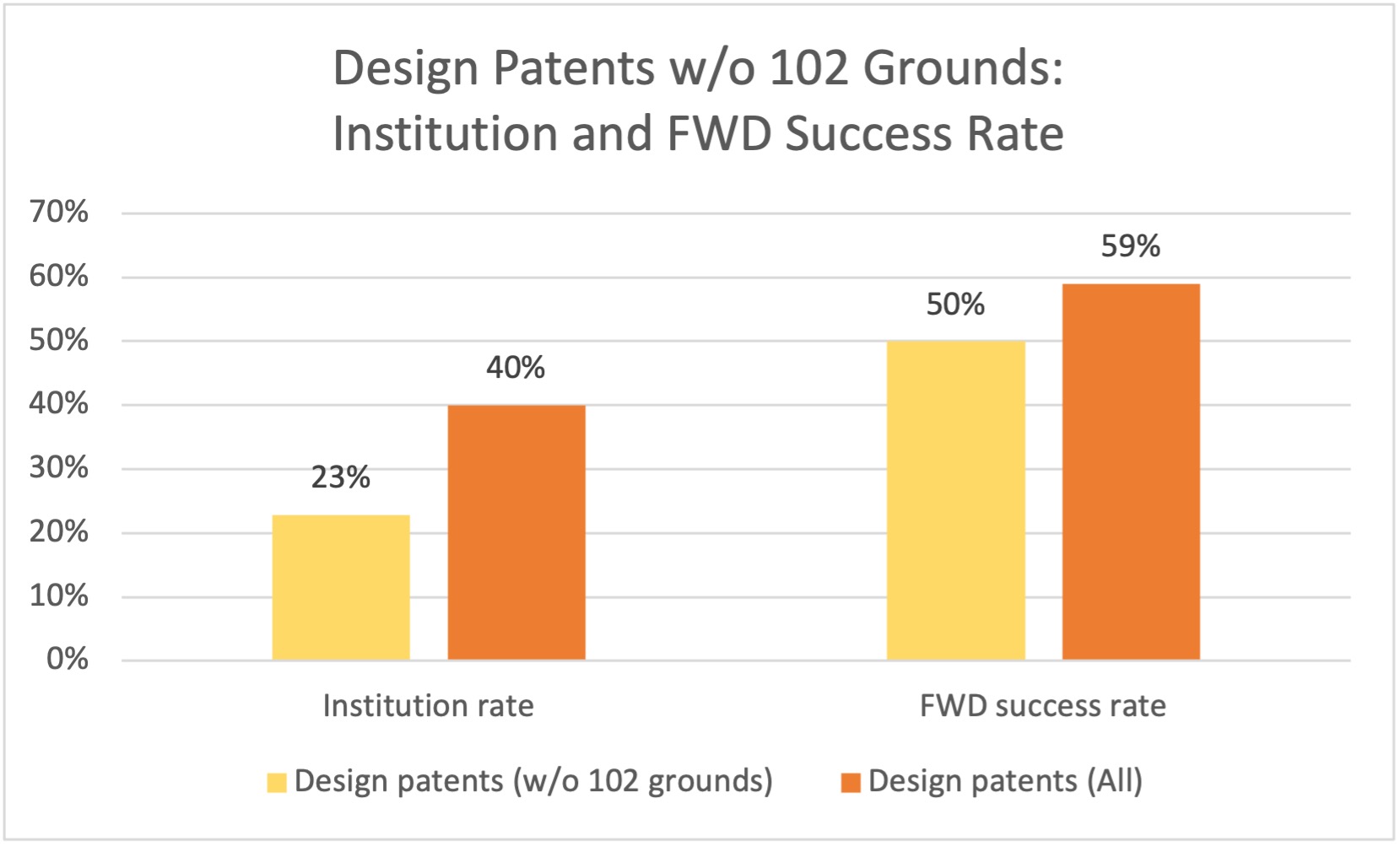 A lack of Section 102 ground can be viewed as a proxy for the difficulty in identifying relevant prior art that provides an overall appearance nearly identical to that of the challenged design. Where petitions do not advance a colorable Section 102 ground (perhaps because the cited prior art would not support such a ground), Section 103 challenges seem to face a particularly uphill battle at the PTAB.

Indefiniteness and enablement issues under Title 35 of the U.S. Code, Section 112 likewise present noteworthy distinctions compared to utility patents in the applications of these requirements.

Unlike their utility patent counterparts, because design patent claims depend largely on drawings, determinations relating to definiteness and enablement are generally similar and can be assessed together in a single standard.[15]

The Federal Circuit has held that “[a] design patent is indefinite under Section 112 if one skilled in the art, viewing the design as would an ordinary observer, would not understand the scope of the design with reasonable certainty based on the claim and visual disclosure.”[16] Accordingly, even a two-dimensional depiction of a three-dimensional design can be sufficient to satisfy the definiteness and enablement requirements in a design patent in some cases.

While PGR proceedings involving indefiniteness and enablement challenges of design patents have been relatively rare in terms of absolute numbers, these types of challenges can offer petitioners another viable option for invalidating a patent. 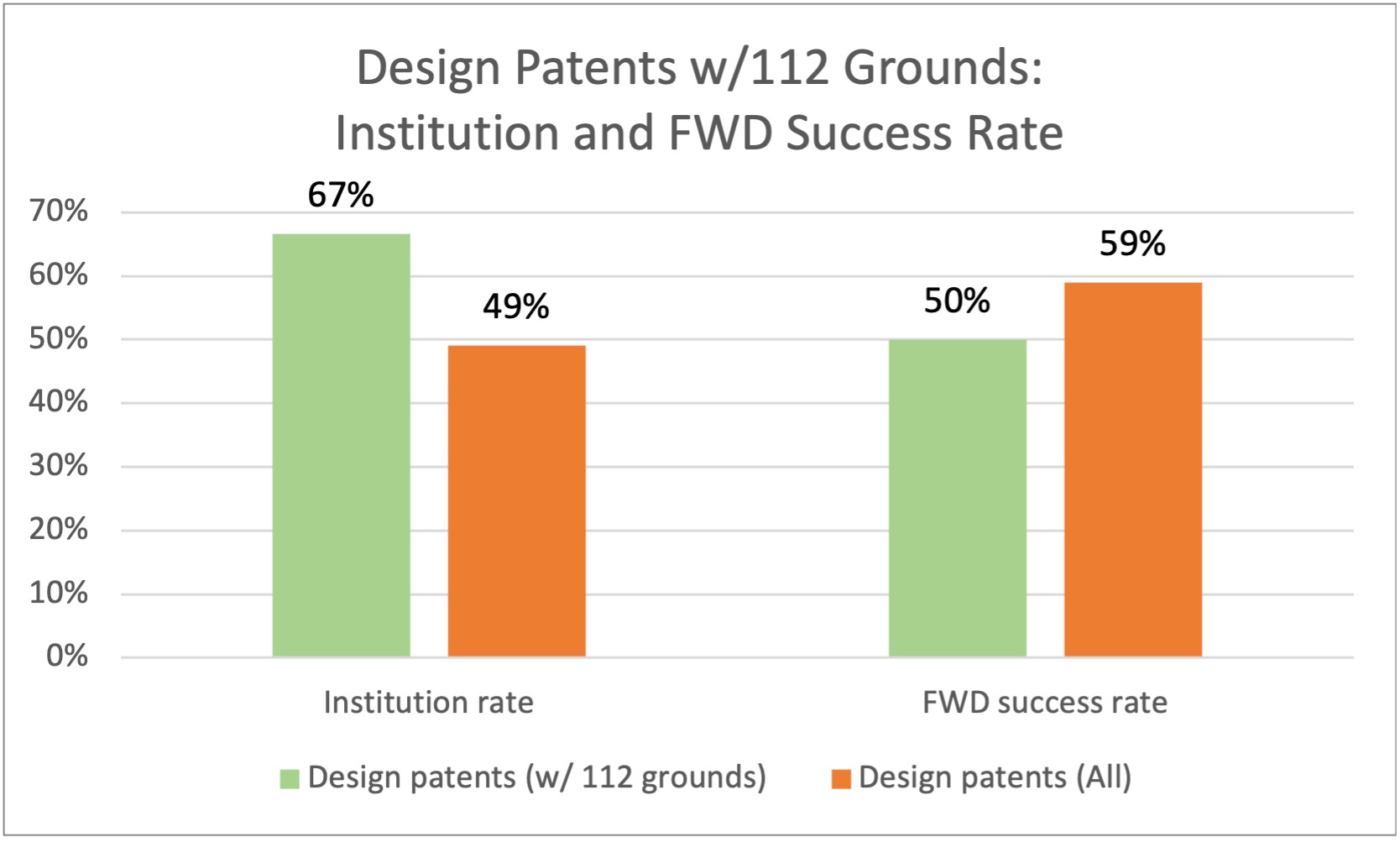 Petitioners’ focus should be on identifying drawing errors that would affect one’s ability to understand the scope of the design for infringement purposes. However, it is important to note that because there are inherent challenges associated with depicting a three-dimensional design in a two-dimensional rendering, petitioners should be wary of identifying drawing inconsistencies or vagueness that could be explained by, for example, differences attributable to a specific perspective view.

[2] Based on independent analysis of PTAB proceeding outcomes available via LexMachina.com and DocketNavigator.com as of April 15, 2022, unless otherwise noted.