Fish attorneys John Phillips and Michael Zoppo authored the Law360 article, “Watching the Sun Set on Covered Business Method Review.” In the article, they discuss the history of the transitional program for covered business method patents, enacted as part of the Leahy-Smith American Invents Act, and the likely future impacts and considerations as the program sunsets on September 16, 2020.

The transitional program for covered business method patents, enacted as part of the Leahy-Smith America Invents Act, will sunset on Sept. 16.

When first enacted, the CBM program was intended to be a temporary solution to a temporary problem, namely to address the low-quality business method patents that issued in the wake of the U.S. Court of Appeals for the Federal Circuit‘s 1998 decision in State Street Bank & Trust Co. v. Signature Financial Group Inc.[1]

While some stakeholders have lobbied for the program to be extended, it has suffered a sharp decline in petitions and, in the absence of congressional action, is poised to sunset as scheduled.

A CBM petitioner may challenge a patent based on any ground of invalidity, including Sections 101, 102, 103 and 112 — except best mode. However, the proceedings may be initiated only by a person, or a person’s real party in interest or privy, who has been sued or threatened with suit for infringement, rather than anyone other than the patent owner, as with inter partes review and post-grant review.

Unlike IPR proceedings, the CBM program never enjoyed widespread popularity. After going into effect in 2012, the program reached a peak of only 173 petitions in 2014, compared to over 1,500 IPR petitions that same year, as illustrated by the below graph.[3] Petitions then entered a precipitous decline, reaching a low of only seven in 2020. 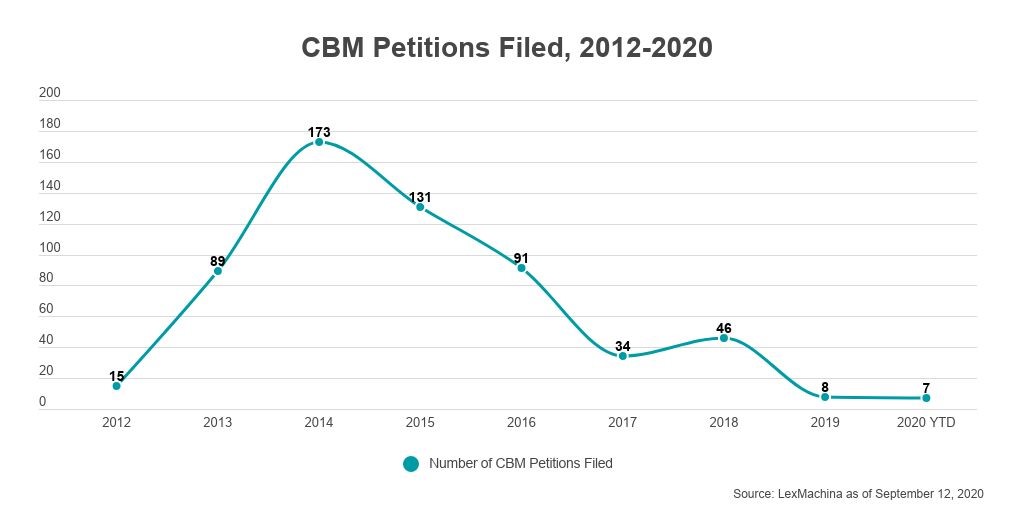 Differing Opinions on the Program’s Success

Some consider the decline in CBM filings to be a natural result of the program’s success at invalidating the most egregious business method patents, but others attribute it to Federal Circuit rulings restricting the program’s scope.

This interpretation broadened the range of patents eligible for CBM review and led to a surge in petitions that was bolstered by the U.S. Supreme Court‘s decision in Alice Corporation Pty. Ltd. v. CLS Bank International.[5][6] As the scope of CBM review expanded, patent owners launched challenges that succeeded in narrowing it.

Even with new eligibility hurdles and declining petitions, the CBM program has its supporters. In a 2018 hearing before the House Subcommittee on Courts, Intellectual Property, and the Internet, John Neumann, then director of natural resources and environment at the U.S. Government Accountability Office, testified in favor of extending the program, stating that a GAO review found that it had largely succeeded in its goal of increasing patent quality by eliminating low-quality patents and reducing litigation involving business method patents.[10]

Likewise, David Hale, chief privacy officer and deputy general counsel at TD Ameritrade Holding Corp., testified that many low-quality business method patents remain and that the CBM program is “a narrowly tailored, carefully constructed program that preserves incentives for innovation while providing an efficient, cost-effective alternative to litigation for the review of questionable business method patents.”[11]

Other stakeholders are not so keen on the program.

A common line of reasoning holds that, unlike IPR and PGR, the CBM program unfairly singles out a specific type of patent, thereby limiting its utility. And by singling out business method patents, the program disproportionately affects the fintech industry, a growing industry with the potential to reshape the way companies deliver financial services.

The Business Software Alliance, for example, argues that the AIA’s other technology-neutral proceedings are capable of handling improperly issued business method patents and that these will still be available after the CBM program expires.[12] But of the two remaining AIA post-grant proceedings, only PGR allows challenges based on Section 101, and PGR is available only within nine months from a patent’s issue date. To encompass all business method patents, the IPR program would need to be amended to allow challenges based on Section 101.

Even without sunsetting, it is possible that the program would have faded away on its own. The program was originally intended to invalidate post-State Street Bank patents, under which the court’s “useful, concrete, and tangible” standard for business method patentability set a low bar and led to the issuance of thousands of patents of now suspect validity.

The weakest of these patents proved to be low-hanging fruit for the CBM program and, given the steep decline in CBM review filings, it appears that the program may have fulfilled its purpose. Patent applications are now examined under a developing body of Section 101 case law that more effectively filters out weak business method patent applications, thereby reducing the need for a specialized post-grant program to invalidate them.

A unique feature of CBM review compared to its AIA post-grant siblings is that it is available only to petitioners who have been sued or threatened with suit for patent infringement. CBM thus requires the trouble and expense of maintaining parallel proceedings, where just the U.S. Patent and Trademark Office filing fees reach well into the five figures. But if a patent is particularly susceptible to an Alice challenge, it is often easier and cheaper for defendants to skip the CBM and challenge the validity of the asserted patent with a motion to dismiss.[13]

Going forward, it is unlikely that the sunsetting of the CBM program will have a significant impact on the patent system due to its already diminished reach. Whether more business method patents will be asserted in court is an open question, but there is little evidence to suggest that a spike in filings, even if one were to occur, would be attributable solely to the demise of CBM. A more likely scenario would be a campaign to incorporate challenges based on Section 101 into IPR proceedings, which are currently limited to Sections 102 and 103.

The Federal Circuit recently indicated its willingness to consider arguments based on Section 101 at least in the context of IPR amendments. In Uniloc 2017 LLC v. Hulu LLC,[14] the Federal Circuit held that substitute claims submitted by the patent owner in an IPR may be challenged under grounds of invalidity not raised in the initial petition, including Section 101.

The court agreed with the USPTO’s stance that:

if a patent owner seeking amendments in an IPR were not bound by Sections 101 and 112, then in virtually any case, it could overcome prior art and obtain new claims simply by going outside the boundaries of patent eligibility and the invention described in the specification.[15]

While Section 101 considerations are limited to amendments for now, the door to IPR has been opened to Section 101, and the sunsetting of the CBM program may give it a push.

The opinions expressed are those of the author(s) and do not necessarily reflect the views of the firm, its clients or Portfolio Media Inc., or any of its or their respective affiliates. This article is for general information purposes and is not intended to be and should not be taken as legal advice.